"Classical medicine, conventional or allopathic medicine, seeks to influence the chemical processes of our body with chemical substances in order to block or transform the processes which cause illness, which is often reflected in the patient suddenly feeling better, but with the risk of side effects/iatrogenic states.  Biological, (naturopathic), medicine attempts to influence the body obliquely, using medicinal stimulants, so that the body's own regulatory process put it into a position, or back into a position where they can restore the disruptive functions back to normal, with minimal side effects, and hence induce healing and health.

Homotoxicology and Anti Homotoxic Therapy is a holistic scientifically rational biomedical system of healing, based on classical molecular immuno-pathology and diagnostics, incorporating the valid system of Ground Regulation, and utilising homoeopathically prepared therapeutics.  This all occurs within a model of increasingly accepted electrodiagnostic bio-electric energy imbalances, which need to be countered with 'bio-energetic therapeutic interventions' such as acupuncture and homoeopathic medicine, together with total nutrient and psychological support for comprehensive patient care, and thus healing effectiveness.  Double-blind, clinically controlled trials published in peer reviewed medical establishment journals have enhanced the validity today of the "Homotoxicology" system of medical care, promulgated by  Dr. Hans-Heinrich Reckeweg in 1952- a system which has developed and 'stood the test of time' since he formulated it.

Reckeweg formulated an essential tenet of homotoxicology thus: Disease is the expression of a resistance struggle by cybermetically controlled flow system, (i.e. the human organism or "homo electromagneticus"), against endogenic homotoxins, i.e. homotoxins to man.

Examples of the former are by-products of normal anabolism and catabolism, as also from inflammatory process; and the latter allergens, pollutants inhaled, ingested or absorbed via the skin integument.  Free radicals, (oxidants), such as reactive oxygen species and reactive nitrogen species can be considered endogenous toxins, however generated; as also are the hormonal excesses generated by stress of various origins.

1) reticulo-endothelium system
(here the antibodies are formed, homotoxins are stored.) 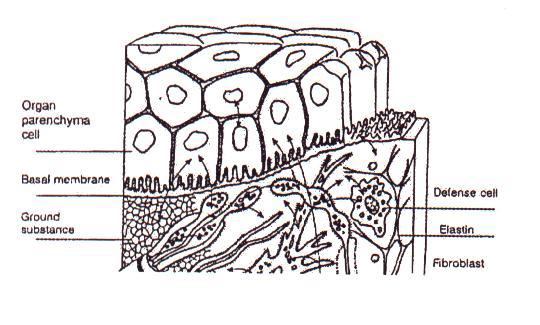 Hence cells have a reciprocal, interdependent relationship with the environment.  Understood biochemically the matrix is a meshwork made up of high-polymer sugar-protein complexes, with embedded structure, (collagen, elastin), and networking glyco-proteins, (fibronectin, laminin etc).

The electrolability of the matrix allows for communication systems to occur both laterally and centrally via the spiral cord to the brain by means of somatic and visceral, (ANS), pathways as also by chemical mediation.  Acupuncture points, (or more truly 'holes'), represent perforations in the superficial fascia, i.e. the border between subcutaneous connective tissue and muscle tissue.  An increased electrical conductivity compared to immediate surroundings can be detected at the 'holes', i.e. difference in potential between them can be measured.  This situation is the basis of Electro-Acupuncture and Diagnostics, (EAV), according to Voll, in the form of adjunct to homotoxic determinants.  All the acupuncture entities lying along a kinetic muscle can be activated in EAV, equally dysfunction can be detected.  These chains correspond largely with meridians.

Thus access to the ground regulation can be attained and accessed, both environmentally and therapeutically, and utilised in neural therapy, biopuncture and homoeosiniaty - infiltration of the holes by stimulation by or alongside anti-homotoxic therapy.  Scientific rationale of the existence and changes of the matrix in disease can be determined by a process of diagnostics termed Biological Terrain Assessment.

Dr. Reckeweg developed a Six-Phase Table of Homo-toxicosis, (progression and regression of disease), and which also provides a basis for anti-homotoxic therapy.  The tissue affected is simply expressed along the vertical axis according to its embryological origin, i.e. ectodermal, entro or endodermal, mesenchymal and mesodermal, though in effect each of these is further subdivided into structural and functional components.  The author believes that in order to totally understand Reckeweg's system a review of embryology is necessary, which results in logical rationale understanding.


There are 3 topic phases, i.e.  humoral and cellular being key and the intermediate or matrix phase of illness, divided in the middle by the biological division.
a)  The Humoral Phases- called in division, diseases of disposition. 1)Excretion Phase-  sweating, rhinitis, urine, bile, diarrhoea, all acting to remove toxins.

b)    3) Deposition Phase- deactivation of toxins AND their storage in the matrix.

4) Impregnation-  commencement of enzyme damage and failure to eliminate toxins.

6.  Phases of Defense Mechanism Against Toxins


This table gives rise to the Reckewegian concept of Vicariation i.e. Succession of one immuno-pathological phenomena by another, (based on Herring's Law),
and organised on embrological germ layer.

This is based on the concept of all disease symptoms and signs being part of a unified reaction process of the 'holistic' body.  "regressive vicariation" represents an improvement in the disease condition and detoxification; while " progressive vicariation", i.e. left to right, or verticaly downward on the Table represents deterioration or failure to remove toxins.  The Reckeweg System of Homotoxicosis is truly an intuitive and inspired System of Medicine which has stood the test of time, whilst also TOTALLY in accord with modern day immunopathological concepts including microchemistry, physics and molecular biological research.

Anti-homotoxic therapy is out of the scope of this article, which seeks to "wet your appetite" and generate your best interest in the System, and seek further learning and understanding of the System by Seminar, Courses and Distance Learning via the Society in the UK., and information concerning Clinical Trials.

Suffice it to say therapeutically the Reckeweg concept can be considered the link between Homoeopathy and Classical Medicine, based as it is on modern concepts of bio-energetic, cybernetic "vital energy" systems in the body, and the use of homoeopathically prepared complex remedies usually in low potencies, designed to restore the patients self-healing vital energy and balance of the biological flow system.

Thus  "the discord of disease, becomes the harmony of health", (Aristotle), by elimination of toxic effects in Homo Electromagneticus.